The NAG Library contains routines for solving the partial differential equations specific to compressible, ideal fluid flow. These equations are generally written in conservation law form where the conserved quantities are mass density, momentum and total energy of the fluid.  This set of equations can be solved using a finite volume technique that considers each conserved variable as a volume average over a finite volume (typically a small cube) and sums the fluxes (flow rates per unit area) computed at the faces surrounding the volume to get the total rate of change of a particular variable for that volume.

Several methods exist to solve this set of coupled equations (e.g. Flux Corrected Transport, ENO and WENO schemes, etc.). I focus here on the Godunov method where, in its simplest form, the fluxes are computed by solving a Riemann problem at the interface between two cells in the computational mesh. In such methods, appropriately limited (I do not address limiting procedures here, but see e.g. [Toro, 1999]) states left and right of a cell interface are computed. These states are assumed to be constant, discontinuous states, i.e. a Riemann problem. The Riemann problem does have an exact solution which can be used to finally compute the fluxes at the cell interface. The NAG Library possesses a routine for computing the exact solution and returning the fluxes to the user in one spatial dimension (D03PX). The NAG Library also possesses three other approximate "Riemann Solvers": Roe’s solver ( D03PU), Osher’s solver (D03PV), and the HLL solver (D03PW). Descriptions of all these algorithms can be found in [Toro, 1999]. To make these routines more generally useful they should be able to handle the full set of three dimensional equations and this blog discusses the modifications to these routines to accomplish this.

In order to extend the current set of Riemann solvers to two and three dimensions, velocities in two additional spatial dimensions must be added to the set of equations describing the fluid flow. The expression for the total energy is also modified to account for these additional velocities. Each of the Riemann solvers mentioned above were modified to take these velocities into account. Each was plugged into an existing two/three dimensional fluid code that I had written earlier. It uses "Monotonic Upsteam-Centered Scheme Limiting" (MUSCL) [van Leer 1976, Toro, 1999] to compute the left and right states for input into the Riemann solver of choice. The method is formally second order in time and space. It also uses dynamic adaptive mesh refinement using the PARAMESH adaptive mesh package [MacNeice et al., 1999, 2000, Olson, 2006, Olson and MacNeice, 2005]. Since it is a multidimensional code, it requires Riemann solvers that can compute and return fluxes for the momenta in all three spatial directions. Therefore, I have produced modified versions of the Riemann solvers in the NAG Library to do this. The solvers modified are D03PX (exact), D03PU(Roe’s solver), D03PV (Osher’s solver), D03PW (HLL solver). Details of all these solvers can also be found in Toro’s book. In addition to this work, we are currently researching a range of improvements to the PDE functionality offered in the NAG Library and encourage users to discuss their requirements with us.

To test my implementations of these Riemann solvers, I have set up and run a test problem. The problem is run in two space dimensions and the domain of the problem is 0 to 40 in the x direction and 0 to 10 in the y direction. The entire domain is initially filled with fluid of density ? = 1. and given a supersonic velocity of Mach 2.7 in the x direction. Into this flow a circular dense region (a blob) of ? = 10 and radius 1 is inserted. The boundary conditions are set to produce a constant inflow of Mach 2.7 at the x = 0 boundary and outflow at the x = 40 boundary. Reflecting boundary conditions are set at the y = 0 and y = 10 boundaries. As the simulation proceeds a bow shock forms at the front of the dense blob. The dense blob is compressed and flattened and at later times Raleigh-Taylor and Kelvin-Helmholtz instabilities form at the interface between the dense blob and the supersonic flow. In the figure below, each panel shows a different time in the evolution of the mass density of the blob as it interacts with the supersonic flow surrounding it. 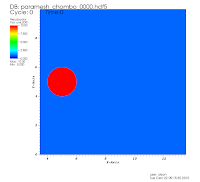 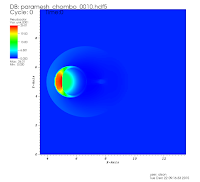 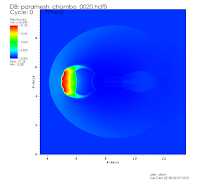 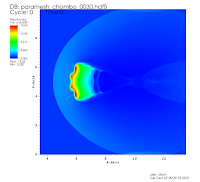 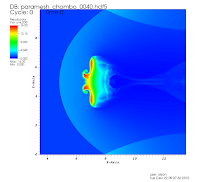 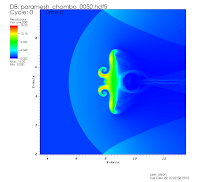 Results using the modified NAG HLL solver are shown in the next set of figures. The results are virtually identical to those from the original code. The rest of the NAG Riemann solvers that I have modified give similar results. 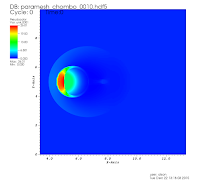 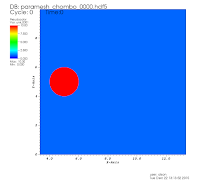 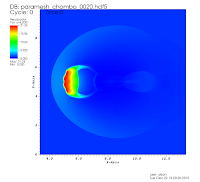 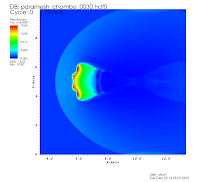 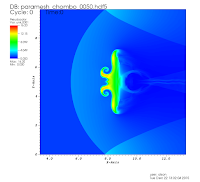 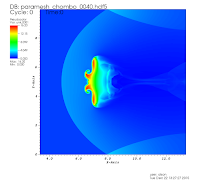